No cats were harmed... 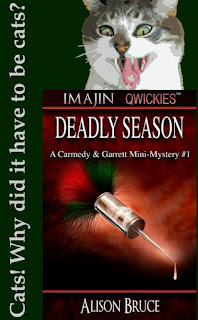 Cats! Why did it have to be cats?
By Alison Bruce

First off, I’d like to say that no real cats were harmed in the making of this book. I love cats…even though I’m allergic to them. Only a strong sense of self-preservation stops me from bringing home every stray (cat or dog) I meet.

It’s the cozies that are to blame. Don’t get me wrong, I’ve read my share of Lillian Jackson Braun and other cozy authors with series that have cats who assist amateur sleuths or at least soothed them on bad days. Most of the cats I know are more likely to compromise evidence than find it, but I’m not dissing the genre. My intention was to put a twist on the modern cozy by making the cats the victims rather than the detectives.

Someone is killing the cats in East Hills and leaving them on the doorsteps of their owners. The police have investigated but they can’t give the case much time. Carmedy & Garrett are called. Specifically, Chief Thorsen calls in his goddaughter and former rookie detective Kate Garrett because he knows she won’t refuse the case.

Violent death was never pleasant. The cold hadn’t diminished the smell of blood, piss and stool—or if it had, I didn’t want to think about it.

A dart, the kind animal control officers use in their rifles, was sticking into the ribs. Instead of delivering a tranquillizer, its payload was poison. The feathery stabilizer at the end was red and green. Very seasonal.

“Do we know what the poison is, Chief?”

“Looks like cyanide. Samples were taken from the last victim. I’ll let you know when the latest batch have been processed and compared.”

Igor Thorsen, Chief of Detectives and my godfather, bent down and offered me his hand. I let him pull me out of the crouch I had been sustaining for several minutes while I examined the body. I didn’t need the help, but it was a warm gesture on a cold night.

“I could use your help on this, Kathleen. People are getting nervous but I can hardly free up a detective for a serial cat-killer. I can authorize support services for a week and the East Hills Neighbourhood Group will pay your fees.”

I stripped off my gloves and ran my fingers through my hair, pushing back the auburn strands that had blown into my face. Time for a cut. Or maybe not. I didn’t have to keep up the uniform code for keeping hair short or worn up.

I looked up at the Chief. Way up. And I’m not short. Or particularly tall.

Last month I was a homicide detective. Now I was a pet P.I.? 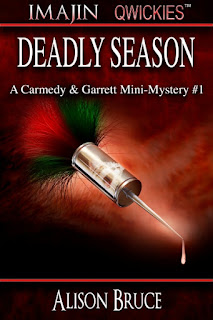 Kate recently inherited half her father’s private investigation company and a partner who is as irritating as he is attractive. Kate has been avoiding Jake Carmedy for years, but now her life might depend on him.

"This is a gripping, edge of your seat whodunit. The fact that the victims were cats made it all the more intriguing." Amazon Review


"This book had a great mixture of humor, clever quips and mystery." Amazon Review

"Although this book is a Mini-Mystery, which does not take long to read, it leaves one wanting more, to continue with the characters and find out what is going to happen next with Kate and company." - Kobo Review