The Night the Bed Fell on Mother 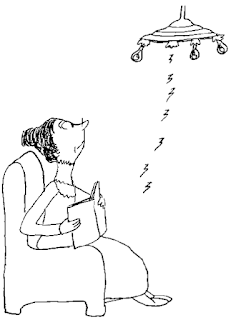 I don't think I have ever laughed harder than the first time I read The Night the Bed Fell by James Thurber. (You can go read the story yourself by following the link, but wait until you've finished my story first. Thurber is too hard an act to follow.)

Just as an aside, the one part I didn't laugh very hard at was when he described the female relative who was afraid of electricity leaking from open sockets. Given that the poor woman came into a world of kerosene lamps and saw the advent of both gaslight and electrical wiring, her fear was quite reasonable. Besides, I've always suspected she was right.

I should also confess that the title of this post is misleading. I have had a bed fall on me, but I wasn't a mother at the time. Nine months later maybe, but not then.

It started with my son needing a new bed. The bunk bed of his youth no longer fit him. Buying a bed is a huge expense that requires the kind of research usually reserved for picking out a car or gynecologist. Since it was important to get the best value (cheapest mattress) possible, I delegated the task to my oldest son who got all the frugal genes going around, leaving none for his younger brother. He found such a good deal, I decided to replace the grungy futon mattress that I had bought back in my student days and looked like a prop for a CSI episode.

To fit my growing boy's long body, we needed to buy a queen-sized bed. The frame arrived last week and the mattresses arrived yesterday. Naturally, my son didn't start cleaning his room until the day before yesterday and did finish until mid-afternoon after the mattress arrived. While my sons deconstructed the Ikea bunk bed (after opening every box of the new frame to find an Allen key, I put my back out switching my double-sized mattresses. About the time I was settled in my chair with a hot bag, coffee and Naproxen, there was a clatter so loud I was reminded of Thurber's story.

But that's not why I'm writing this.

I inherited an almost new double bed from my father. He and my mother shared a king-sized bed when she was alive. My kids (a toddler and infant at the time) and I shared the bed when we first moved in with my father, shortly after my mother died and immediately after my common-law marriage fell apart with my caesarian-section wound. When we moved to a place where the kids could have their own beds, we replaced Dad's king with a double.

He might have slept on the bed a half-dozen times, tops. One of the reasons we could take over his bedroom, back when, was because he usually slept in his chair. That's how I inherited an almost new bed from my father. I didn't like his mattress, so I put my futon on top. When I got my new mattress, I took off the futon and put the new one on top... bringing me up in the world.

I should have known there would be trouble when I climbed into bed. A step stool would have been helpful. Still, once I finally got settled, the mattress was wonderfully comfortable. I slept like a baby until I woke up at 5 am to pee. As I rolled out of bed, my feet had trouble finding the floor. Then everything hit the floor including my laptop table, laptop, glasses, the all important painkillers and me.

I'm surprised my kids slept through the cacophony. I was pretty loud when I landed on my knee. Now I'm going to take my life in my hands again and try to get back to sleep. First I'll move my bedside desk and little further away...and maybe put on knee pads.