on July 04, 2016
School's out for summer. Time to stock up on summer reading material. Imajin Books is celebrating with the Summer Sizzles eBook Sale. I'm celebrating by featuring some of my fellow "Imajineers" during the sale. Can't forget myself, can I? 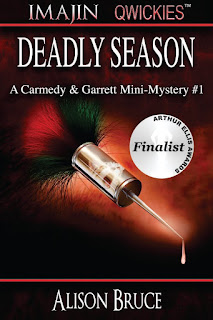 Kate Garrett recently inherited half her father’s private investigation company and a partner who is as irritating as he is attractive. Kate has been avoiding Jake Carmedy for years, but now her life might depend on him.

Kate and Jake are on the hunt for a serial cat killer who has mysterious connections to her father’s last police case. Kate’s father had been forced to retire when he was shot investigating a domestic disturbance. Is the shooter back for revenge? And is Kate or Jake next?


An old-style memory card slid out of the envelope with a neatly bound file folder. I felt a shiver of anticipation ripple down my neck, making my shoulders twitch. The card was the kind my father used in his audio recorder. In addition to official recordings and reports, he found it useful to keep a more conversational record of his thoughts on a case.

I set aside the plastic-cased card for later. Instead, I thumbed through the report copies and yellowed newspaper clippings, trying to get a sense of what the case was about and why my father would keep the file.

This was my father’s last case as a police officer.