on July 07, 2016
School's out for summer. Time to stock up on summer reading material. Imajin Books is celebrating with the Summer Sizzles eBook Sale. I'm celebrating by featuring some of my fellow "Imajineers" during the sale. 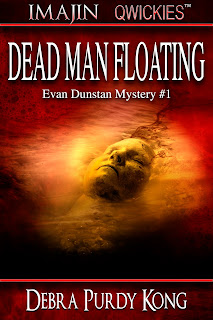 One wrong decision…
Security guard Evan Dunstan didn’t expect to find a body floating in a campus stream. An empty vodka bottle nearby suggests that the highly despised George Krenn, head of the plumbing department, had drunkenly fallen in. Refusing to let the death of a vile man ruin his romantic plans, Evan decides to leave the body for the next shift to find.

One friend in trouble…
When it’s discovered that Krenn was murdered, Evan has a lot of explaining to do. So does his friend Sully, Krenn’s least favourite student. Evan uses his hacking skills and campus knowledge to keep them both out of jail, but the investigation forces him to question Sully’s innocence.

One mystery to solve…
Uncovering the truth proves to be more than challenging. It may cost Evan his job, his friendship, and his woman. Will Evan find the killer, or will the killer find him first?
Meet Evan Dunstan

Not the greatest great crime-solver, but at least he tries.

“They found a teacher in this stream the other day.”

Evan kept his gaze on the water. “I heard.”

As the object floated nearer, the player said, “What the hell is that?”

Something round and light protruded from the bag.

While more of the players came forward, Evan couldn’t quite believe what he was seeing. An inflated pink balloon was attached to the top of the bag. Round eyes, bushy eyebrows, and a gaping mouth had been drawn on the balloon with a thick black marker. Inflated latex gloves protruded from each side of the bulky bag. Police tape was wound around the bag with a sign that said, HELP! I CAN’T SWIM!

The team burst out laughing.