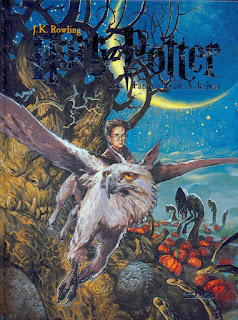 "Happiness can be found, even in the darkest of times, if one only remembers to turn on the light." (Harry Potter and the Prisoner of Azkaban)

Harry Potter came into my life at an interesting juncture. My mother had died of aggressive small cell lung cancer a year and a half before. My sister Joanne had just been released from hospital after almost dying. And I was coming to terms with the fact that my postpartum depression wasn’t going away any time soon.

In order to be allowed to come home, Joanne needed constant care. That meant I had to move in with my toddler son and preschooler daughter. My nieces also came home. They had been staying with their father while Joanne was in hospital. The living room transformed with the addition of a hospital bed, oxygen machine, commode, and lift chair. There were a lot of changes and huge helpings of stress. The Harry Potter books eased the tension.

"There are some things you can’t share without ending up liking each other."
(Harry Potter and the Philosopher’s Stone)

This was our “best of times and worst of times.” When my sister first came home, we weren’t sure whether she would get any better. In addition to twice daily visits from a nurse, she had Hospice Wellington volunteers helping out.

At the same time, my sister and I connected at a level deeper than I could imagine… and we were always close. She encouraged me to start writing again and, a bigger step, submitting my work for publication. My nieces became my other children, my daughter their little sister. My son forged an alliance with the dog… but that’s another story.

My niece Sophie had just discovered Harry Potter and Joanne wanted to find out what all the excitement was about. We worked our way through the series from The Philosopher’s Stone  to The Goblet of Fire. Then we had to take a break to read The Lord of the Rings while we waited for The Order of the Phoenix to be released.

We didn’t get through all of that while living with Joanne. She got well enough to take care of things on her own and we moved out of her bedroom. We didn’t go far, though. Me, the kids and my dad moved into the same townhouse complex. When things got bad, as they did, on and off, I could take care of my sister and still go home to my own bed.

"It is our choices… that show what we truly are, far more than our abilities."
(Harry Potter and the Chamber of Secrets)

There came a time when I was carting a Harry Potter tome (the books were getting weighty now) between hospitals. I’d been taking books to read to all my sister’s treatments and post-op visits. When my dad had a major stroke, I was going back and forth between two hospitals to read to both of them.

In our family, it was a series for all ages.

You can probably see where this is going. My sister never got to read… or hear the end of the series. My father read or heard all but the last book. We stopped reading the books aloud. Sophie preferred reading and her sister Claire wasn’t as interested in the magic world. She had twinkling vampires on the brain.

It doesn’t matter. Harry Potter was there for us. The books carried the kind of messages we needed to hear at the time, messages that still resonate.

"We must try not to sink beneath our anguish, Harry, but battle on."
Harry Potter and the Half-Blood Prince