What's up with me

ALISON BRUCE HAS NOT FALLEN OFF THE PLANET

Though not for lack of trying... 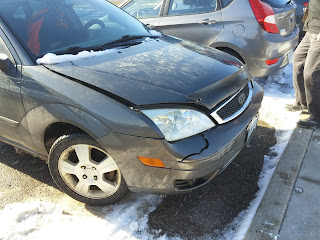 Doesn't look like that much damage, does it? It was bad enough for the insurance company to write-off the car. Of course, much of the damage is out of sight.

Although I only felt shaken up, I knew I'd probably suffered a hyper-extension injury, aka whiplash. What I didn't realize, until my doctor told me, was that, although I didn't hit my head, my brain hit the inside of my skull giving me a concussion. Like the car, I had hidden damage. Fortunately I couldn't be written off.

I'm sure I must have bruised my brain before this. I've been in more than one serious car accident... accidents where it's obvious the car isn't going to be repaired.
Come to think of it, maybe this time was worse because of the previous injuries.


LOOKING FOR THE SILVER LINING

For a week I couldn't work at my laptop. Then I could work, but not for long periods of time. I probably shouldn't have, but I could work on my tablet. I still needed breaks but not for as long. I could keep up with my email and. it turned out, I could edit. Not write, though. That took too much concentration.

Way back while I was sending UNDER A TEXAS STAR and DEADLY LEGACY to publishers, I wrote GHOST WRITER, thus proving I am a true genre slut, unable to keep from wandering from one genre to another.

When Imajin Books and I found each other, GHOST WRITER, a second draft novel by this point, went on the back burner. It pretty much went right off the stove since I thought writing Western Historical Romance and Mystery/Romantic Suspense was enough genre hopping for one writer. The accident changed that.

It wasn't just that it was something I could work on, it was something I really wanted to work on. So when Cheryl at Imajin Books asked for something completely different, I knew what it would have to be. As of now, I have a contract and am looking for advance reviews. When I have more news, you'll see it here.

If I don't get hit in the head.