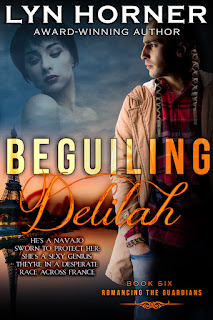 He’s a Navajo sworn to bring her to America;

At last! Beguiling Delila (Romancing the Guardians, Book 6) is here. This one took longer than usual to write because of all the settings I had to research. Most of the book is set in France. Delilah Moreau, the glamorous French Guardian, possesses a miraculous mathematical talent that provides her a privileged life, but it can’t give her what she truly wants: lasting love.

Leon Tseda, a Navajo whose homeland serves as a hidden gathering place for the Guardians, vows to bring Delilah to safety, thwarting thugs sent to capture her and the valuable scroll she guards. Opening in Paris, the story whisks the pair in a life-and-death chase across France to Nice and Monte Carlo on the breathtaking Côte d’Azur.

Both Delilah and Leon have lost loved ones, and they’re no longer youngsters, but they are not too old for a second chance at love. Their journey is fraught with danger, excitement and steamy, mature romance. Will it lead to love – if they live long enough?

Overview of the series so far: There are seven Guardians, each possessing a psychic gift and a precious scroll containing a secret prophecy handed down from ancient Irish seers. Not to be revealed until mankind is ready to listen, the prophesies are in danger of being seized by vicious “Hellhounds” who want to use them for their own evil ends.

Decoding Michaela (Book 2) features a heroine who can read minds. Stunned by news that her revered leader, the High Guardian, has been murdered, Michaela Peterson is attracted to Dev Medina, the handsome messenger, but fears he may be out to steal the scroll she guards. Can Dev win her trust and unlock her heart before the Hellhounds capture her?
US Amazon     UK Amazon     CA Amazon     AU: Amazon

Capturing Gabriel (Book 3) is set in Colombia. Gabriel Valdez refuses to believe the feisty Navajo beauty who tracks him down with a message to meet the other Guardians in the United States. Instead, he takes her prisoner. Josie doesn’t count on falling for him. Gabriel doesn’t intend to trust her with his secrets or his love, but the heart has a mind of its own.
US Amazon     UK Amazon     CA Amazon     AU: Amazon

Touching Charlotte (Book 4) Introduces Charlotte Dixon, an empathic Guardian, and Tristan Jameson, an ex-NYC cop burdened by grief. He needs healing and love, but how can a man romance a woman who can’t stand to be touched? Breaking through Charlotte’s barriers while protecting her from Hellhounds proves his ultimate challenge.
US Amazon     UK Amazon     CA Amazon     AU: Amazon

Profiling Nathan (Book 5) is a chilling murder mystery/sexy romance. Guardian and ex-con Nathan Maguire just wants to make a living inking tattoos in Tampa, Florida, but when FBI profiler Talia Werner walks into his shop, she turns his life upside down. To save her pretty neck, he must help catch a serial killer. His deadly psychic gift may come in handy.
US Amazon     UK Amazon     CA: Amazon     AU Amazon

BEGUILING DELILAH Excerpt
Leon thrust open the door to Delilah’s outer office and charged in. He tossed Esme a quick greeting as he strode to the inner door. She replied but didn’t try to stop him when he once again entered Delilah’s private office unannounced. He found her standing at a small open closet tucked in beside the wet bar in the corner.
“We must leave. Now,” he said the moment she turned to look at him. “The Hellhounds have come. They were at your condo asking for you.”
Her eyes widened. “How do you know it was them?”
“I know because at least one had a gun. Come, we must go. They might be on their way here right now.”
She made a choked sound, grabbed her coat from the closet and stuffed her arms into the sleeves. Snatching her handbag off her desk, she rushed over to him, breathing fast. Leon gripped her elbow and turned toward the door he’d left partway open. At that moment, a man’s voice sounded from the outer office. He spoke in French. Leon didn’t understand the words but caught his threatening tone.
Esme screamed and Delilah cried out, clutching Leon’s arm. Then her inner door was shoved open, banging against the wall. Three men barged in. Determined to protect Delilah, Leon circled his arm around her, slipping his other hand into his jacket pocket at the same time.
The shortest of the three, who had asked for Delilah at her condo, was apparently the leader. An ugly lantern-jawed tough, he reached under his coat and pulled out an automatic. Pointing it at Leon, he growled something in French.
“I do not understand your words,” Leon said mildly, “but I have no gun if that is what worries you.”
“Oh yes? Then show what you do have,” the man ordered in thickly accented English, indicating the hand Leon had stuffed in his pocket.
He nodded and obeyed. Extending his fisted hand, he uncurled his fingers to reveal a small pile of fine, dark powder lying on his palm. “This is only a calming medicine I sometimes use.”
Laughing, the Frenchman sneered, “You need calming now, eh, old man?” He waved his weapon at Delilah, causing her to gasp. “Release the woman. She is to come with us.”

Delilah trembled in fear. Would Leon meekly hand her over to the vile trio? Intending to resist, she tried to draw away from him, but his arm tightened like an iron band around her waist, holding her close. Seeing him bend his head, she thought he meant to inhale the calming powder but, instead, he blew it into the men’s faces.
The three inhaled sharply, choked, coughed and screwed their eyes shut. “What the hell?” The leader demanded in a strangled voice. Trying to blink the dust from his eyes, obviously unable to see, he waved his gun back and forth.
Delilah shrieked, certain he was about to shoot both Leon and her. But he didn’t get the chance. Clutching her arm, Leon hurried her past the blinded men and out the open door. She spotted Esme crouched on the floor behind her desk. Resisting Leon’s tug on her arm, she shouted, “Don’t cower there like a frightened rabbit, Esme. Come! We must escape!”
White with fear, the trembling girl rose and followed them. As the elevator doors opened, Delilah heard the three villains stumbling from her office, shouting furiously. Heart hammering, she dashed into the elevator with her companions and sagged in relief against the wall when the doors closed. Esme huddled in the corner, crying and shaking.
Leon laid his hand on the girl’s shoulder. “Calm down and look at me,” he said, drawing her tearful gaze. “When we reach ground floor, Delilah and I must run. But you should go to the security desk and ask the guard to call the police. Will you do that?”
“Oui, M-Monsieur,” the girl stammered, swiping tears from her cheeks. “But what if those terrible men follow you?” Esme glanced anxiously at Delilah. “Can you protect Madame Moreau?”
“We must leave the city for a while, but do not worry. I will keep her safe.” 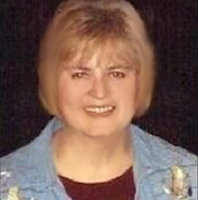 Lyn Horner is a multi-published, award-winning author of western historical romance and romantic suspense novels, all spiced with paranormal elements. She is a former fashion illustrator and art instructor who resides in Fort Worth, Texas – “Where the West Begins” - with her husband and a gaggle of very spoiled cats. As well as crafting passionate love stories, Lyn enjoys reading, gardening, visiting with family and friends, and cuddling her furry, four-legged children.