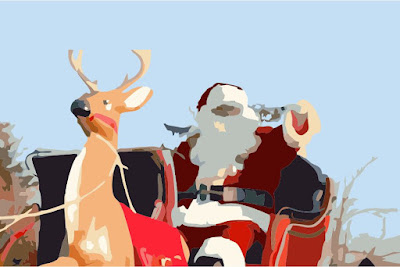 Jacques: This is Jacques Seaudeau and Gillian Hill from CKOI Radio reporting on this year's Santa Claus Parade. Gillian, what's the weather forecast for the day.

Gillian: Sunny and cold, Jacques. Perfect parade weather. The hot chocolate vendors will be doing well today. Fortunately the street is ice free now. Unfortunately, that was not the case earlier when the Pipe and Drum band were forming up. Due to a slip on the ice, they are down one drummer.

Jacques: That's not the only weather-related incident today. New Harlem Globe Trotters were booked to do an exhibition performance at the Sports Centre. They also agreed to march in the parade.

Gillian: I take it Globe Trotter performance is cancelled.

Jacque: Yes, but the boys and girls basketball teams from Our Lady of Lourdes will be taking their place in the parade. We've been assured they will do their best to mimic the jumps and passes that make the Globe Trotters famous.

Gillian: Hold on, Jacques. I have correction to make. It turns out the hot chocolate is free. They've got eight locations all along the parade route and one at the end. They're charging for cups but if you have a travel mug, they'll fill it up from their cauldron for free using oversized spoons crafted by Santa's elves.

Jacques: Are they in place now? I could use something warm about now.

Gillian: They're ready and waiting.

Jacques: Apropos of hot chocolate, the Dairy Breeders Associaton is marching with examples of the top eight breeds of milk cows dressed up as reindeer.

Gillian: I hope they have diapers. Next up is the the Let's Dance Studio. They usually gives us a jazzy version of Nutcracker Suite. This year they've opted for Swan Lake.

Jacques: Now a word from our sponsors. Why store and maintain equipment you'll only use for part of the year? Rent from Snow King. With their loyalty program, your sixth rental gives you store credit.

Gillian: That's a great deal and here's another one. City Jewellers is offering five gold bangles to the person who calls into CKOI with the gift given on the third day of Christmas.

Jacques: Listen! Can you hear the sirens. That will be the Fire Department leading the parade. You can see the areal floats. The kids are going to get a kick out of seeing their favourite cartoon characters drifting above them.

Gillian: Um, Jacques. What's that floating toward the river?

Gillian: So, to summarize,we've got:
12 drummers drumming
11  pipers piping
10 Lourdes a leaping
9 Ladles waiting
8 Breeds for milking
7 Swans a swinging

Jacque: And don't forget the 6th lease is paying. Also, the 5 golden rings go to the 4th caller in for 3 French Hens

Jacques: And that's it from Partridge City 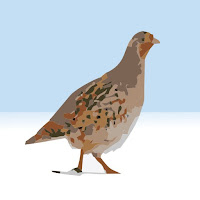