The Alphabet now Ends at Y

on December 30, 2017
"If high heels were so wonderful, men would be wearing them."
Kinsey Millhone

I was introduced to Sue Grafton and Kinsey Millhone when my mother started reading the series. At the time I was reading more science fiction than anything else, but I appreciated the series from the start. It was easy to tell what my mother did and did not have when it came to present giving. I might have a poor memory for titles, but I knew my alphabet.

The last birthday gift I gave her was N is for Noose. She was recovering from chemotherapy at the time.

I started reading the series after my mother died. Since my father wasn't a mystery reader, it was easy to convince him to let me nab the whole series. There were a few holes in the alphabet, mostly in the early books. It took me years to find A is for Alibi.

T is for Trespass put me off for a few years. At the time it was released, I was taking care of my father, the mail-order addict. He was sure that the more he ordered from Readers Digest and Publishers Clearinghouse, the more likely he'd win the big prize. He bought Australian lottery tickets from sellers in Hong Kong and once tried to send cash to a Nigerian Prince. T for Trespass was just too close to home for me.

"Ideas are easy. It's the execution of ideas that really separates the sheep from the goats."
Sue Grafton 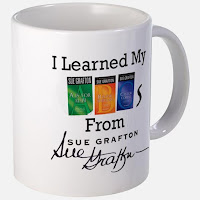 I started back at the beginning of the alphabet. I still haven't found H is for Homicide, but I caught up to J is for Judgement, which was the beginning of my mother's solid run. By this time, after many rejections and long periods of just writing for myself, I was a published mystery author. Now I started to appreciate Sue Grafton's work for fellow authors and would-be writers.

I always said I'd finish the alphabet when the alphabet was finished. That suits by binge style of reading. Since the planned "Z is for Zero" was never started, the time to finish is now.

"Her daughter said Grafton would never allow a ghostwriter to write in her name and "as far as we in the family are concerned, the alphabet now ends at Y.""
Wikipedia