Now is the winter of our discontent...
made glorious spring by the return of Ghost Writer.
(Apologies to the Bard.)

Okay, it's not quite spring, but it will be by the time Ghost Writer is out on the Kindle and Kobo platforms. It took me long enough. The rights reverted to me in January but there was so much going on.

Then I had to catch up on work after being sick...

Then it was too cold. Too grey. And the dishes needed doing. At which point I realized I was putting off the task because it involved a new platform. I was suffering from anticipatory platform-related anxiety.

Getting back to Shakespeare, I finally "stuck my courage to the sticking place" and it wasn't nearly all the "toil and trouble" I imagined it would be. That was yesterday. Today I managed to get the Kindle edition up along with the Kobo and Kindle editions of Deadly Season. Soon, both books will be available for pre-order.

Now, where did I put the Kobo link? A memory, a memory. My kingdom for a memory.

She has to deal with two kinds of spooks: spies and ghosts.
But which one is trying to kill her? 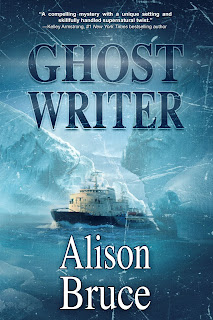 In her role as ghostwriter, Jen joins a Canadian Arctic expedition to document and help solve a forty-year-old mystery involving an American submarine station lost during the Cold War. The trouble is, there are people—living and dead—who don't want the story told, and they’ll do anything to stop her.

Now Jen is haunted by ghosts she can’t avoid or handle alone. That means confiding in the one man she doesn’t want to dismiss her as “crazy.” But can he help? Or is he part of the problem?