What does your coffee preference say about you?

I've read several articles on the subject and have come to the conclusion that your choice says about your depends on who is making a judgement call on your choice. Not that I was expecting any real psychological insight, any more than I do from the tests that determine which Hogwarts House I belong in (either Griffondor or Hufflepuff depending on the test).

All that being said, coffee is the beverage of choice for most of my characters. So what does their coffee preference say about them? 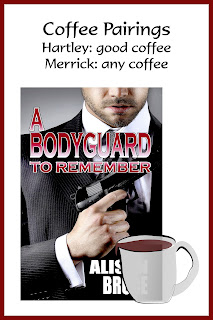 Pru Hartley is the character most like myself, at least in her coffee preferences. At the beginning of A Bodyguard to Remember, her neighbour brings her a vanilla latte, because that's what she drinks when they have coffee at Starbucks. When she's asked if she wants something from Tim Horton's, she orders an English Toffee Cappuccino (aka an ET Cap). This dates me and the book because you can't get that at Tim's any more. At home, however, she brews drip coffee and drinks it black no sugar.

According to Dr. Oz: "I found that the black coffee drinkers were straight up, straightforward and no-nonsense. Whereas those double decaf, soy, extra-foamy folks tended to be more obsessive and controlling. The latte drinkers tended more to the neurotic and being people pleasers, while the instant coffee drinkers had a greater likelihood of being procrastinators. Finally, those sweet folks who order those sweet drinks (e.g. frapped up coffee drinks) were the overgrown kids who retained the taste buds and sensibilities of children."

So Pru is a straightforward, no-nonsense, neurotic people pleaser. She is not obsessive, controlling, or (necessarily) a procrastinator. Come to think of it, that's not far off!

Merrick is an archetypical cop in his coffee preferences. He doesn't care much whether it's good coffee or bad coffee as long as it's hot, black and strong. 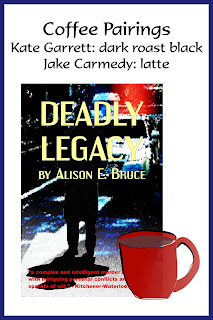 Kate Garrett also likes her coffee strong and black, but she's a stickler for well made coffee. This is only hinted at in Deadly Legacy, but in Deadly Season, we see that one of her upgrades to the office has a proper coffee bar so she can make cafe Americano for herself and cafe lattes for her partner, who left to himself, would only drink cola..

The Gentleman's Journal has this to say about Americano coffee: "This strong, no-nonsense order is for strong, no-nonsense people. Favoured by night-shift journalists and hard-boiled police detectives, this oily brew is coffee in its purest – but not tastiest – form. People know you just need a pick-me up if you order this – or that you’re trying to look hard."

Kate doesn't try to look anything, but she isn't as hard as she seems. And Jake is far from being a laid-back softy even if he does like the lattes Kate makes him. 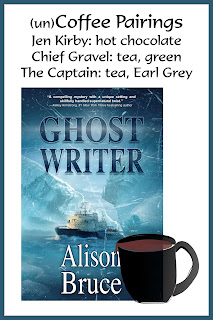 Despite what everyone thinks, I'm not all about coffee all of the time. In Ghost Writer, Jen Kirby loves her coffee, but she also enjoys rum spiked hot chocolate with the Skipper, and a proper English tea with Captain Campbell. She is even persuaded to forego coffee for green tea to help her handle all the stress she's experiencing. (People trying to kill you is rather stressful.)

Tea is a family connection for me. "I'll put the kettle on, shall I?" was the standard response to good times and bad. It was one of the first things my mother or aunt would say when the other one arrived and, at least in my mother's case, it was the first thing she said after family left. (Until I was ten or eleven, then it was "While you're up, can you put the kettle on?")

What does tea drinking say about you? That's another story.


It's that time of year: the culmination of the Arthur Ellis Awards. I no longer manage the awards but as executive director of Crime Writers of Canada, I'm still heavily involved.

That's my excuse for being erratic posting to this blog and I'm sticking to it.

Now I'm going to go put the kettle on.